The seagrass habitats are a highly productive marine ecosystem which provides nursery ground and shelter for many fish and invertebrate species. Pholis nebulosa (Temminck & Schlegel, 1845) is one of the most abundant seagrass fishes in the coastal waters of Korea. The estimation of fish production is key for devising conservation measures and ensuring fish resources sustainability. A total 894 P. nebulosa ranging from 3.83 to 26.5 cm total length (TL) were collected monthly in 2006 with a small beam trawl in a seagrass bed of southern Korea. Growth parameters of P. nebulosa were estimated using the von Bertalanffy growth model, and production was estimated using a general equation which relates daily fish production to ash-free dry weight (AFDW), biomass, and water temperature. The von Bertalanffy's growth equation was estimated as: Lt = 28.3823(1-e-0.7835(t+0.9864)). The densities, biomass, daily, annual production, and P/B ratio were 0.069±0.061/m-2, 1.022±0.621 g/m2, 0.005±0.004 g AFDW/m2/day, 1.676 g AFDW/m2/yr, and 1.641, respectively. Monthly variation in production of P. nebulosa peaked during March and April 2006 (0.0139 and 0.0111 g AFDW/m2/day), whereas the lowest value of 0.0005 g AFDW/m2/day was in December. Monthly change in production of P. nebulosa was positively correlated with biomass and condition factor. Our results will contribute to the conservation of seagrass ecosystems, which are still undisturbed in the study area.

The study area of Dongdae Bay is a body of water in the Korean Peninsula rich in seagrass beds that only recently has been influenced by human activities. The bay provides critical habitat for variety of invertebrates and juvenile fish. Of particular importance is the function of Dongdae Bay seagrass habitats in supporting larger, predatory fish, which are mostly of high commercial value (Park and Kwak 2018). Investigating the value of the seagrass habitats in supporting populations of P. nebulosa, therefore, may aid in devising regulations for habitat conservation and proper resource management, especially if assessed in light of production capacity expressed in the form of interactions between biotic variables, and population growth and mortality (Cusson and Bourget 2005; Dolbeth et al. 2008).

Measuring biomass of aquatic organisms is a primary tool in quantifying ecological investigations. Dry weight or ash-free dry weight is typically used as a proxy for energy contents of aquatic animals which represent energy transfer from producers to consumers (Weil et al. 2019), because an assessment of energy fluxes in ecosystems requires both the quantification of the consumer’s diets (Nielsen et al. 2018), and a determination of the energy contents of prey and predators (Cummins and Wuycheck 1971). In addition, an estimation of the amount of organic matter as food for higher trophic levels is given by the ash-free dry weight (Widbom 1984).

Generally, fish secondary production is region-specific. For example, reef habitats may enhance fish production by providing available habitats and elevating food resources, relative to nearby unstructured habitats (Peterson et al. 2003). It has been previously shown that production for Acanthogobius flavimanus in seagrass habitats was higher than in unvegetated adjacent habitats of Dongdae Bay (Kwak et al. 2009). The studies on fish production in Dongdae Bay have extended from assessing potential yield for fisheries management to include ecological characteristics of populations, such as feeding success according to distributional patterns of epiphytic algae for Pseudoblennius percoides and Hippocampus mohnikei (Huh et al. 2008; Kwak et al. 2008; Kwak 2009), furthering the understanding of such habitats for management from a resource conservation perspective.

The objective of this study was to estimate growth and production of P. nebulosa to supplement earlier studies assessing functional characteristics of fish assemblages in seagrass bed habitats. The results can be useful form as a prediction that seagrass beds support a greater abundance and number of species of fishes than adjacent unvegetated habitats. In addition, studies of fish production including multiple species may better contribute to the effectiveness of resource management and habitat conservation measures than single-species studies.

The study site of Dongdae Bay locates in the southern coastal waters of Korean Peninsula. In Dongdae Bay, seagrass forms subtidal bands about 3,000 m wide along the shoreline (Fig. 1). To estimate growth and production of P. nebulosa, samples on seagrass habitats were conducted using a 1.9 cm mesh wing and body, 0.6 cm mesh liner beam trawl. Sampling was carried out monthly during 2006 on spring high tides. Beam trawl sampling area was approximately 180 m2 per sampling event. The surface water temperature and salinity were also monitored during each sampling period. 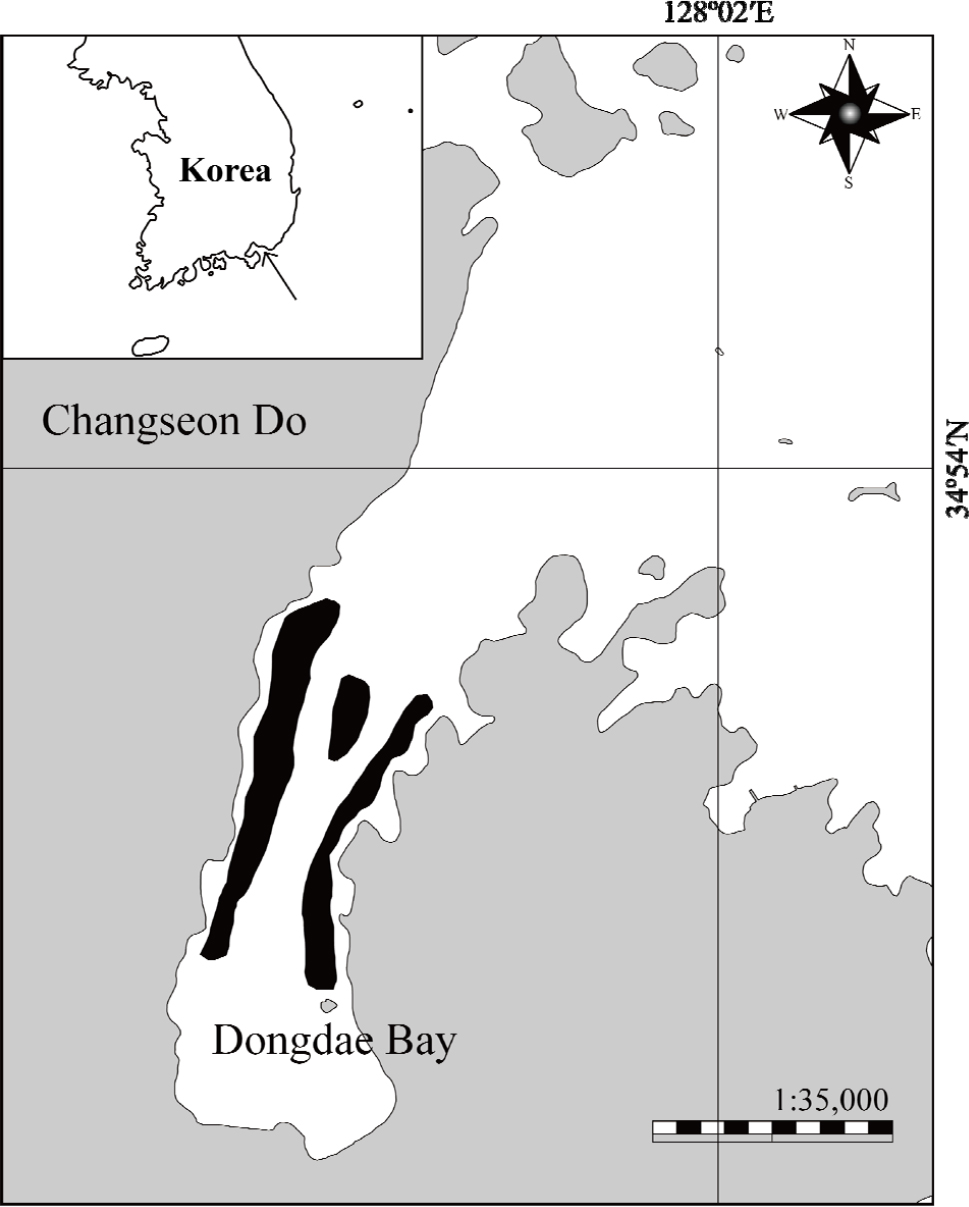 All fish samples were preserved in 10% buffered formalin immediately after capture. Total length (TL) and body weight (BW) to the nearest millimeter and 0.01g in the laboratory, respectively, were taken. Also, in the laboratory, the peritoneum of each fish specimen was excised, and the gonads removed and then weighed to the nearest 0.0001 g (GW). The gonadosomatic index (GSI) and condition factor (CF) were calculated as GSI = (GW/BW) × 100, CF = (BW/TL3) × 100. Sex was determined macroscopically by examining gonads. One-way analysis of variance (ANOVA) was used to assess monthly differences in GSI and CF values. Tukey’s post-hoc comparisons were used to assess whether there were significant differences of GSI and CF values among months.

Growth was used as a basis for determining production. Growth was estimated only for the year of sampling, providing increments observed within one year. Growth increments were estimated for each year-class cohort of fish. Cohorts were determined visually by investigating size frequency distributions obtained from successive sampling events. Size frequency distributions were constructed using 1 cm TL bins.

The mean GSI and Cf values varied significantly with month (P < 0.05, ANOVA, Fig. 2). The mean GSI values of both male and female were lower during spring and summer and began to increase in October, reaching the highest level in November and decreasing thereafter (ANOVA post-hoc test, Fig. 2A and 2B). Spawning took place primarily from October to November. The mean seasonal values of condition factors were lower in winter (January and December), but showed higher values in summer (from June to August) indicating better body condition before commencing spawning (ANOVA post-hoc test, Fig. 2C). 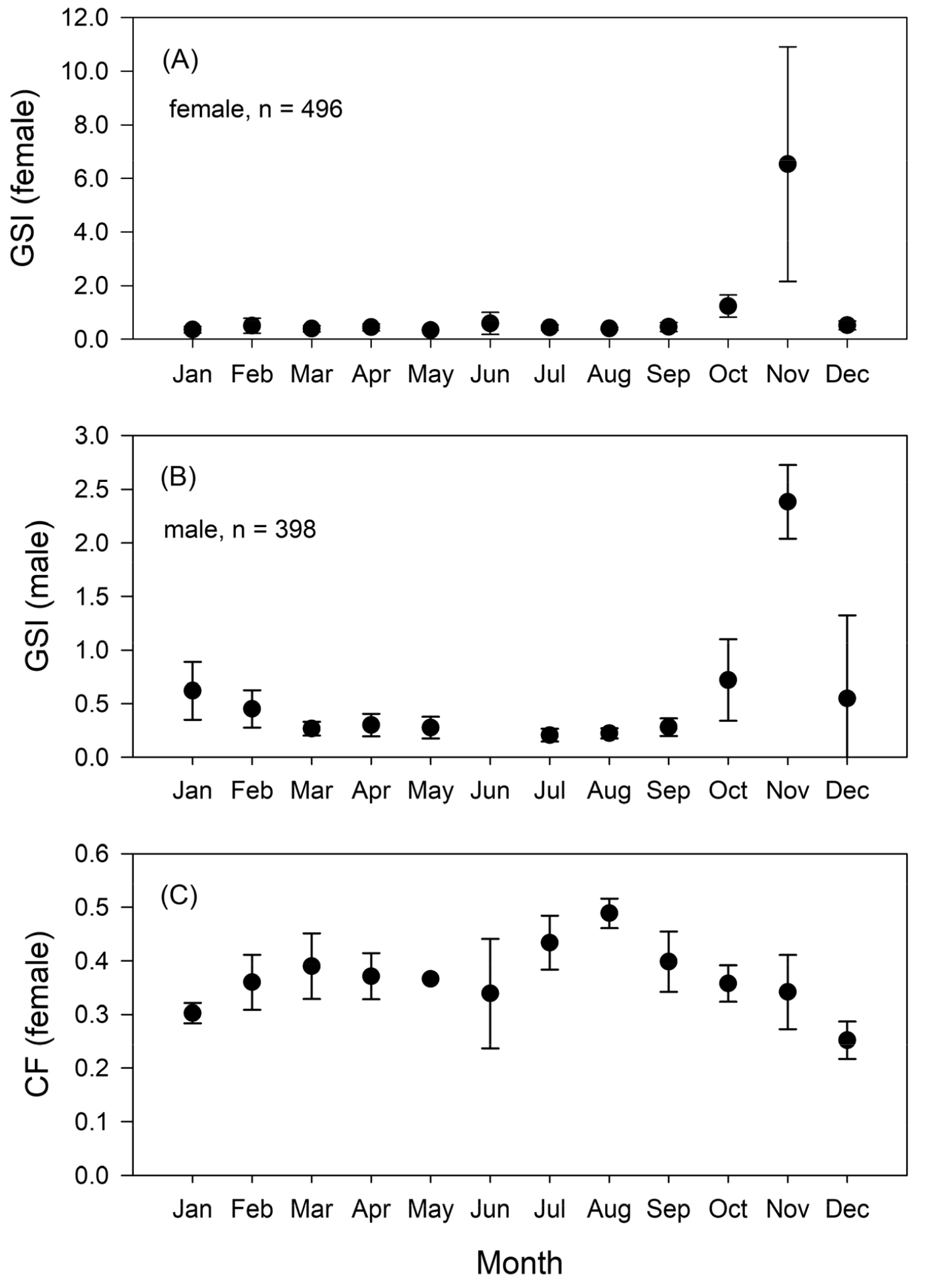 Monthly variations gonadosomatic index (A, B) and condition factor (C) for P. nebulosa in a seagrass bed of Dongdae Bay (Circle and bar represent the mean and range) 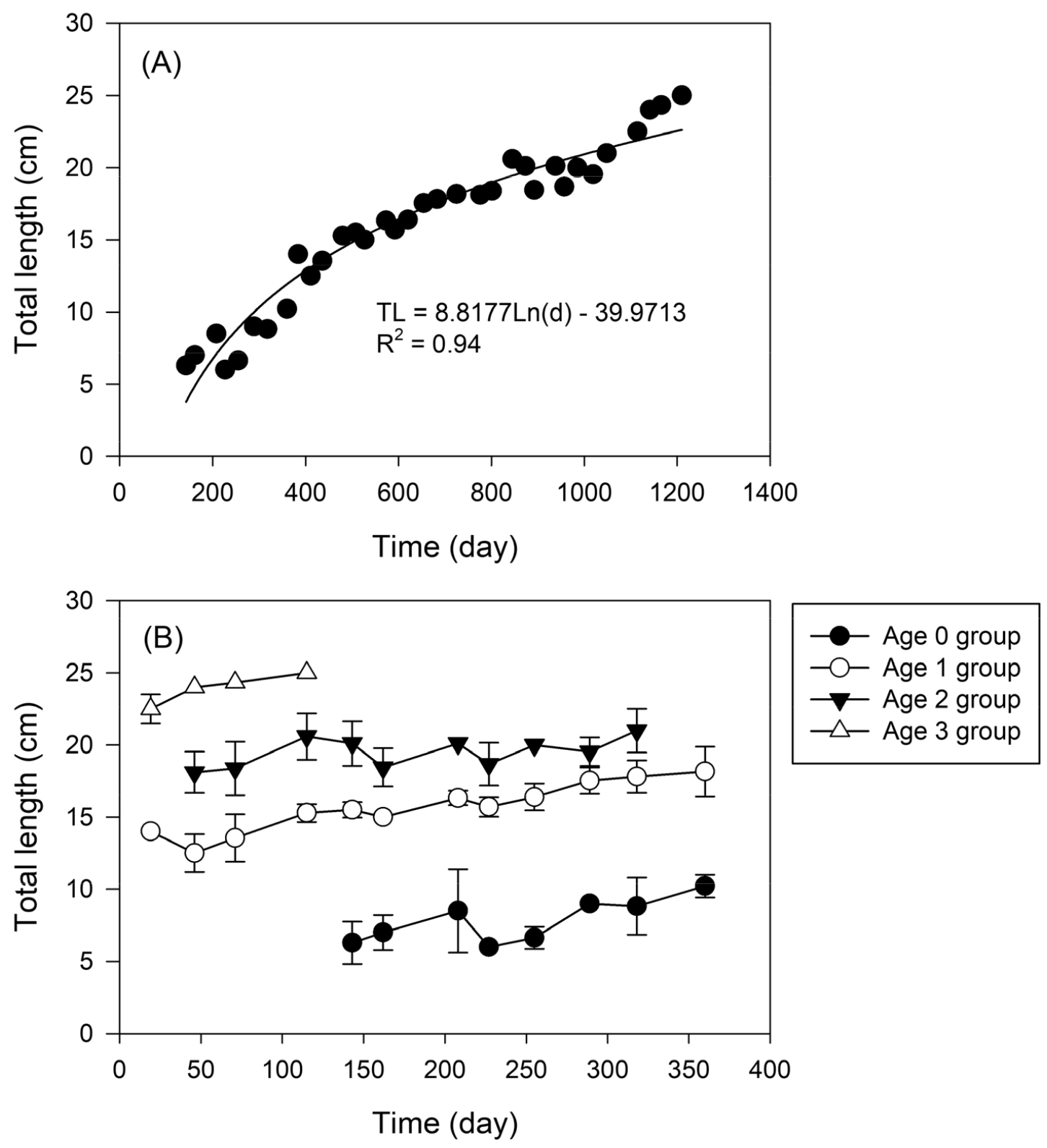 Temporal variation in growth curve (A) and total length (B) of each age group of P. nubulosa with cohort analysis in a seagrass bed of Dongdae Bay (The square and bar are mean value and standard deviation of each cohort) 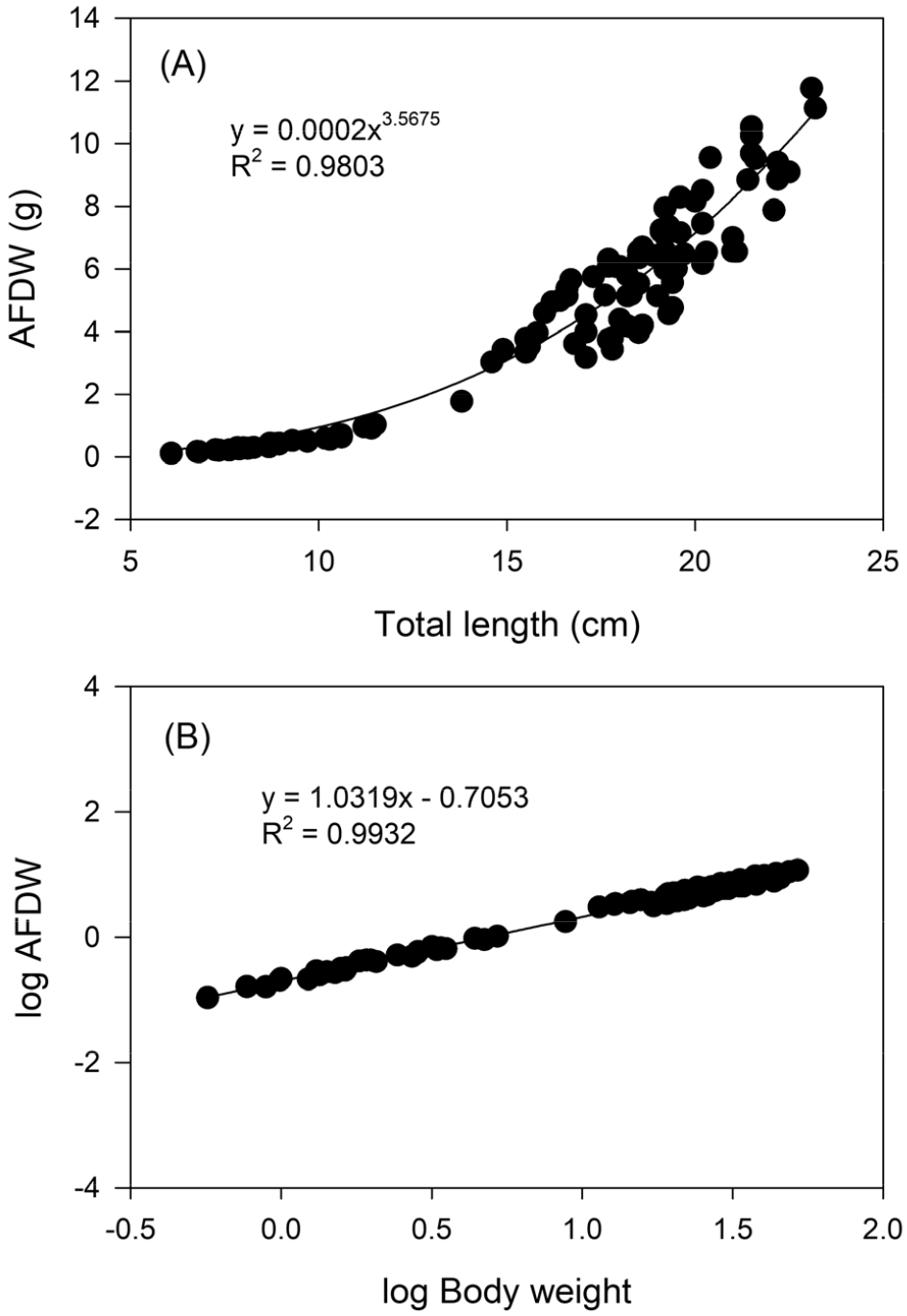 Relationships between ash-free dry weight and total length (A), and body weight (B) of P. nebulosa in a seagrass bed of Dongdae Bay 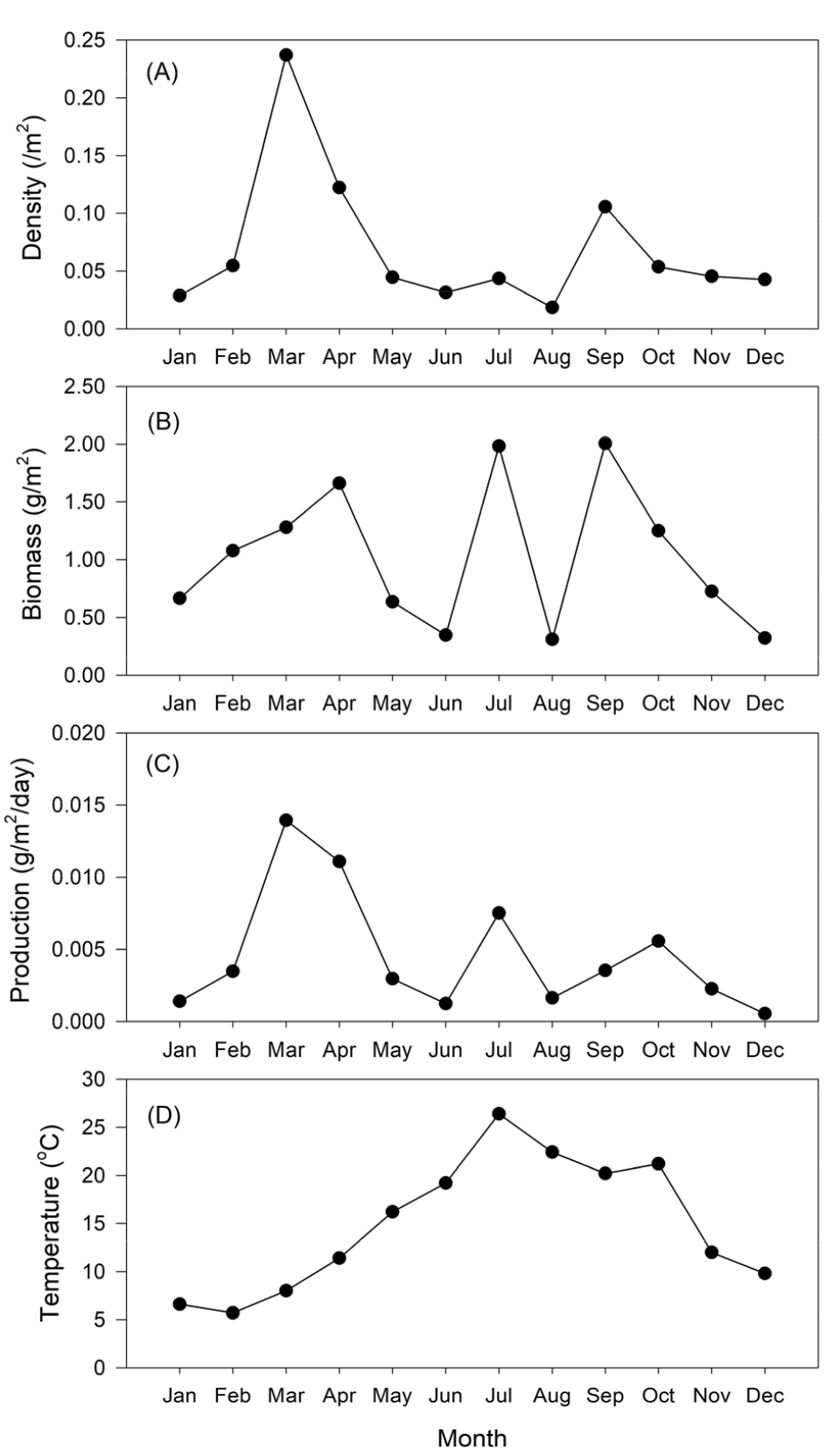 Monthly variations in density (A), biomass (B), production (C), and temperature (D) of P. nebulosa relating to temperature in a seagrass bed of Dongdae Bay

This study is the first to provide density, growth, and production of P. nebulosa in a seagrass bed. Estimation of fish production accuracy has been provided for short time intervals relative to the dynamics of the fish and for populations of large sizes (Hemminga and Duarte 2000; Nagelkerken et al. 2002), demonstrating large variations in accuracy. Accuracy variation is partly due to variations in recruitment and fluctuations in migration rates in and from fish populations. Pholis nebulosa is the most abundant species in local seagrass beds, comprising more than 70% of total biomass of the whole fish community (Kim 2010). Estimates of daily production have been determined worldwide based on growth increments and monthly temperature following the method of Edgar and Shaw (1995). In all studies, accuracy of production estimates has fluctuated, yet their ecological importance remains. Our study, due to the large biomass contribution of P. nebulosa, reveals important ecological mechanisms for seagrass environments in coastal Korea.

The P. nebulosa population dominated over the study periods with monthly variation in number of individuals. Smaller individuals first appeared in May and June 2006, with most of individuals larger during the remaining periods. Individuals larger than 10 cm TL, however, were always present during study periods. Because Pholidae species live within seagrass habitats during whole their lifecycle, these patterns were mostly due to variations in spawning and recruitment throughout the life span of our target species. Length frequency analysis as well as the overall pattern from GSI and condition factor data, however, indicated that smaller individuals of P. nebulosa would recruit in May from spawning events during November and December in the previous year. Our observations were in agreements with other studies showing most individuals of P. nebulosa spawning during lower temperature months, between November and January (Kimura et al. 1987; Kang et al. 1996). Kang et al. (1996) showed lower growth rates from otolith data for P. nebulosa between November and December, coinciding with the spawning periods for that species. Most of temperate fish species essentially stop growing after maturation, resuming rapid growth rates after spawning. In addition, high condition factors before starting breeding season may reflect high energy reserves for future spawning activities (Trippel and Neil 2004).

There were considerable monthly variations in production of P. nebulosa observed in this study, with highest production in March and April 2006. Analyses including number of individuals, growth rate and production showed significant positive correlations with eelgrass biomass, while those showed negative correlations with water temperature (P < 0.05; Park and Kwak 2018). Alternatively, density was not correlated with production (P > 0.05). These patterns are similar to those observed for A. flavimanus, Sebastes inermis, Aulichthys japonicas, Psedoblennius cottoides, and Synganthus schlegeli occurring in this study’s area (Kwak et al. 2009; Kim 2010). In the study area, mean abundance of fish assemblage was significantly higher at seagrass habitat and during spring when eelgrass biomass was the highest, but not corresponded with water temperature (Park and Kwak 2018). Therefore, fish density consequently fish production looks not correlated with water temperature at least in seagrass habitats. Also, the specific growth rate and production of fish species was highly correlated with the ratio of liver weight to total weight, which may be used as indicators of growth rates (Cui and Wotton 1988; Diana 2004).

Daily and annual production of P. nebulosa was higher (0.005 g AFDW/m2/day and 1.676 g AFDW/m2/yr) than that of A. flavimanus (0.001 g AFDW /m2/day and 0.351 g AFDW/m2/yr) at unvegetated areas nearby at our study sites. Acanthogobius flavimanus production values, however, were similar in a seagrass bed of Dongdae Bay (Kwak et al. 2009). For productivity of P. nebulosa, P/B (1.64) was also higher than those for A. flavimanus, S. inermis, A. japonicas, and P. cottoides in our study area (Kwak et al. 2009; Kim 2010). The dominance and high production of P. nebulosa could be resulted from the high food availability for P. nebulosa in the study area. Higher food availability for P. nebulosa has also been reported in other studies, where it has been observed that the species mainly feeds on amphipods (gammarids and caprellids) occurring on the blades of seagrasses (Huh and Kwak 1997).

Production of P. nebulosa in this study was higher than that reported elsewhere for temperate and subtropical seagrass fish communities. The result might have been due to higher seagrass productivity, consequently higher prey densities supporting higher production of P. nebulosa in the study area. Several other studies have shown that many fishes species, including P. nebulosa, prefer seagrass beds for feeding and nursery habitats (Huh and Kwak 1997; Kwak et al. 2006; Kim 2010). Seagrass beds, therefore, may support larger numbers and higher production of P. nebulosa, due to its diversity of prey organisms for fish species, making these habitats of ecological and economic importance not only for Korea, but likely worldwide.

We are grateful to Mr. Bong Jun Sung and Mr. Jung Yun Kim for assistance with sampling and data analysis. This research was funded by the Korea Institute of Ocean Science & Technology [grant numbers PE99913].