In this study, the embryonic development and hatchability of eggs fertilized by the reciprocal hybrids of kelp grouper (Epinephelus bruneus) and red-spotted grouper (E. akaara) were evaluated with the goal of establishing a novel hybrid with enhanced growth and viability during the farming period in the temperate waters of Korea. The fertilization rates were lower for hybrids than for maternal purebreds and were significantly higher in the red-spotted grouper ♀ × kelp grouper ♂ hybrid (RGKG, 89.61 ± 1.58%) than in the kelp grouper ♀ × red-spotted grouper ♂ hybrid (KGRG, 74.82 ± 4.23%, p < 0.05). Unlike the fertilization rates, the hatching rates of fertilized eggs were similar between hybrids and maternal purebreds and did not differ significantly between KGRG and RGKG (72.74 ± 3.60% vs. 75.23 ± 2.20%, respectively, p > 0.05). The embryonic development of the hybrids was similar to that of maternal purebreds; however, irregular cleavage and asymmetric blastoderm were noticeable in the developing eggs of KGRG hybrids. The deformity rates of newly hatched larvae were higher in hybrids than in maternal purebreds and were significantly higher in KGRG than in RGKG (17.47 ± 1.28% vs. 7.11 ± 0.54%, respectively, p < 0.05). These results demonstrate the potential to produce viable larvae from these two hybrids. Although the production efficiency of KGRG was lower than that of RGKG, the fertilization, hatching, and deformity rates make both hybrids useful for further comparative studies regarding economic aspects.

Most groupers (family Serranidae: subfamily Epinephelinae) are important in the aquaculture industry owing to their high economic value. A majority of their global aquaculture production (155K tons/year) is concentrated in China, Taiwan, and Southeast Asia (FAO 2019; Rimmer and Glamuzina 2019). Traditionally, groupers have been sold at high prices in Korean markets, with the kelp grouper (longtooth grouper, Epinephelus bruneus) and red-spotted grouper (E. akaara) particularly sought after for their taste and reddish body color, respectively (Kim et al. 2005). The seeds of these two groupers have been mass-produced for about 10 years, and they are now farmed commercially in sea cages and land-based tanks.

In Korea, however, there are two difficulties related to farming these two groupers. Both species experience retarded growth during low-temperature periods (below 15°C, November to April); accordingly, it takes approximately 3 years for the kelp grouper and red-spotted grouper to reach their minimum marketable sizes (about 1 kg and 0.6 kg, respectively). In addition, even when treated with antibiotics, immunomodulators, chemotherapeutics, and vaccines, almost all individuals of both grouper species die from infections with Vibrio spp. during high-temperature periods in the summer (above 23°C, July to September), when growth rates are high (Harikrishnan et al. 2012).

Therefore, it is necessary to develop the novel grouper hybrid, which has the same viability as the parent species at the temperature in Korea waters, with improved growth and disease resistance through hybrid vigor. As a first step to investigate the possibility of production of the grouper hybrids inhabiting temperate water, the embryonic development and hatchability of fertilized eggs of the reciprocal hybrids of kelp grouper and red-spotted grouper were compared in this study.

Broodstocks of approximately 250 individuals of the kelp grouper and 1,200 individuals of the red-spotted grouper were captured near Jeju and Yeosu and cultured in sea cages for 2–3 years. Females with inflated abdomens and males with milt excretion from their genitalia when their abdomens were pressed were selected, transferred, and stocked in two separate land-based concrete tanks (5 × 5 × 1.5 m). After stocking in land-based tanks, females with oocytes at the vitellogenic stage (oocyte diameter: 300–450 μm) were selected. The oocytes were sampled using biopsy from anesthetized females using catheters (12 Fr; Sewoon Medical Co., Ltd., Seoul, Korea) according to the methods described by Chatakondi et al. (2011) and measured under a microscope (EVOS®XL Core Imaging System, Life Technologies, Carlsbad, CA, USA). For gamete production, a mixture of luteinizing hormone releasing hormone-salmon (LHRH-s, 400 μg/kg body weight; Sigma-Aldrich, St. Louis, MO, USA) and human chorionic gonadotropin (HCG, 500 IU/kg body weight; Daihan Pharmaceutical Co., Seoul, Korea) was injected into the dorsal muscle of females (5–7 individuals of the kelp grouper and 5–10 individuals of the red-spotted grouper) and males (3 individuals of the kelp grouper and 5 individuals of the red-spotted grouper) (Noh et al. 2019). Eggs were collected by hand stripping 36–42 hours after the hormone injection, and milt was obtained within a day of egg stripping and stored at 4°C (Yu et al. 2017). Gamete production was repeated three times during the spawning season in 2015 (trial I in June and trials II and III in July).

Air stones were used to supply weak aeration to the beakers containing fertilized eggs, and about 80% of seawater at the same temperature was exchanged by siphoning at approximately 6-hour intervals to maintain the water quality.

Images of each embryonic developmental stage were obtained after observing about 50 fertilized eggs using two microscopes equipped with a digital camera (EVOS®XL Core Imaging System, Life Technologies, Carlsbad, CA, USA; Leica DM 750, Leica Microsystems, Wetzlar, Germany) and classified based on previous studies (Chen et al. 2018; Iwamatsu 2004). The observed fertilized eggs were disposed of after counting to avoid the effects of handling. Images of deformities observed at each stage of embryonic development were obtained; however, the deformity rate was only investigated for newly hatched larvae (about 50 larvae/beaker, triplicates). Deformities were defined as the absence of a straight body or a distinct head distinguished from the yolk (Okomoda et al. 2017).

The eggs that settled to the bottom of the beakers (unfertilized and dead eggs), which were collected by siphoning when exchanging seawater, and hatched larvae and unhatched developing eggs were fixed at the end of the experiments in 10% neutral formalin (Sigma Aldrich, St. Louis, MO, USA) and counted. Hatching rates were calculated according to the following formula: (100 × no. of newly hatched larvae) / (no. of eggs × fertilization rate). Fertilized eggs were considered dead if they did not hatch within 6 hours of the first hatched larva. The time to hatching was estimated as the time required for about 50% of fertilized eggs to hatch.

The stripped eggs of the kelp grouper and red-spotted grouper were transparent and spherical. They were separated based on their buoyancy and almost all had a single oil globule. The mean diameters of the stripped eggs were 908.12±21.03 μm (n = 110) for the kelp grouper and 814.41±17.46 μm (n = 130) for the red-spotted grouper.

Parameters of embryonic development and hatchability of the reciprocal hybrids of kelp grouper (Epinephelus bruneus) and red-spotted grouper (E. akaara)

*Uppercase and lowercase letters after values (mean±SD of three trials) indicate the results of an independent t-test (between two crosses with the same female broodstock species) and one‐way ANOVA with Duncan's multiple range test (between all crosses), respectively. Values with the same letter were not significantly different at the 0.05 level. 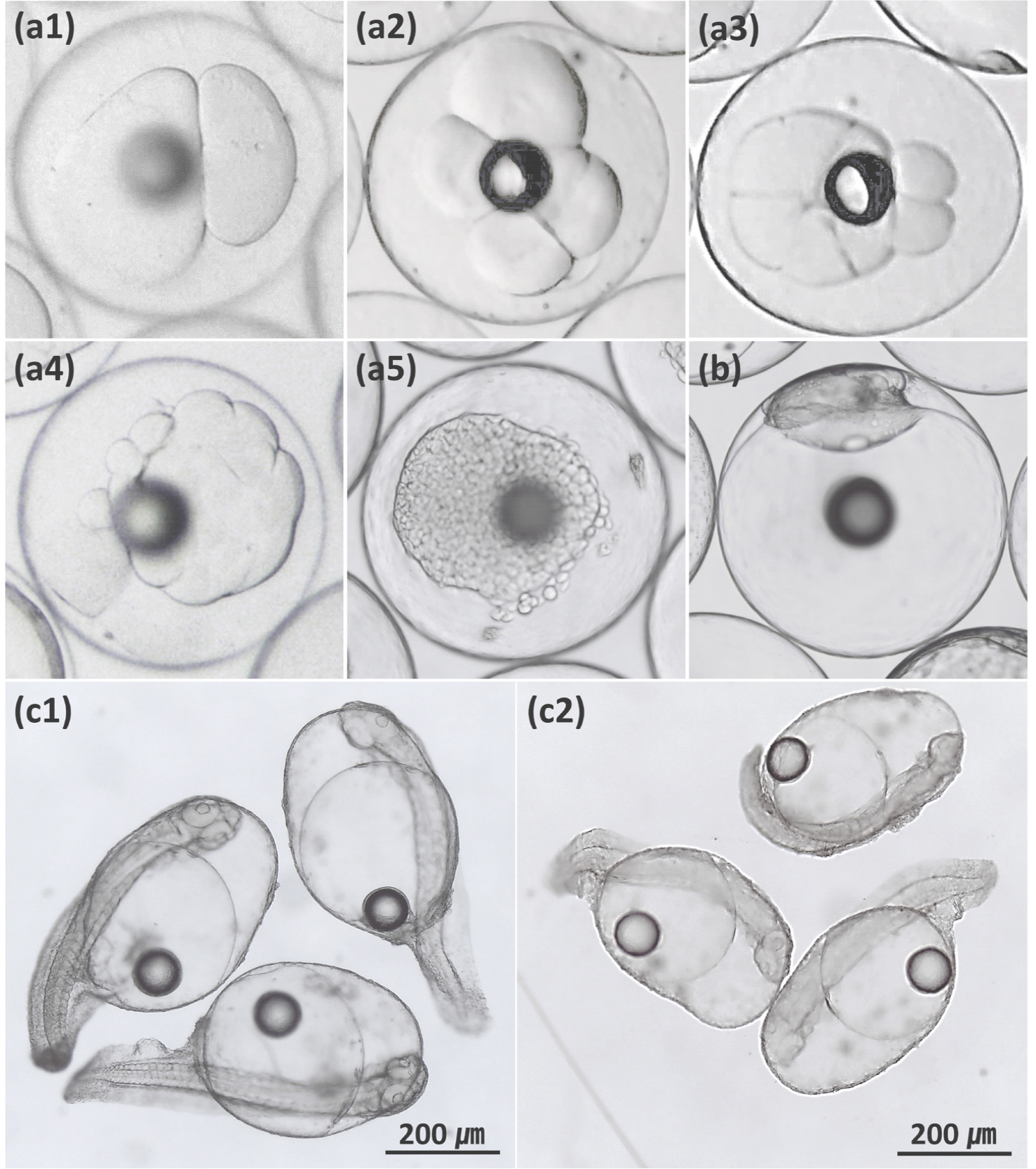 The development of embryonic deformities in fish is determined in part by the quality of gametes, water temperature, and salinity (Bermudes and Ritar 1999; Bonnet et al. 2007; Haddy and Pankhurst 2000). In this study, the water temperature (23.07–23.40°C) and salinity (32.37–33.63 psu) in the embryonic development experiments were within the appropriate ranges (21–25°C and 30–34 psu) for embryonic development in the kelp grouper and red-spotted grouper (Noh et al. 2019; Yang et al. 2007). In the study of Noh et al. (2019), the hatching rate of maternal purebred of the red-spotted grouper was the highest at 25°C to 77.17%, which was no different from that (77.46%) of this study. And Yang et al. (2007) reported that the proper hatching temperature for purebred of the kelp grouper was 24°C. Moreover, maternal purebreds had high fertilization and hatching rates and low deformity rates. Therefore, the high deformity rates of newly hatched KGRG and RGKG larvae can be attributed to specific properties of the species, rather than to egg quality, water temperature, or salinity.

There were no differences in the times to hatching between the hybrids and maternal purebreds, and this parameter was determined by the species of the female. Fertilized eggs from the crosses with the female red- spotted grouper (RG and RGKG) hatched significantly faster than those from the crosses with the female kelp grouper (KG and KGRG) (Table 1, p < 0.05). The time required for fertilized hybrid eggs to develop into fish is the average time for both parental species, similar to one parental species, or, in some cases, slower than the parental species (Chevassus 1983).

This study represents a first step toward the development of the novel grouper hybrid. The embryonic development and hatchability of eggs fertilized by reciprocal hybrids of the kelp grouper and red-spotted grouper were analyzed, and the production of viable larvae of the two hybrids was demonstrated. Although normal larvae from striped eggs were obtained more efficiently from RGKG than from KGRG in terms of the fertilization rate, hatching rate, and deformity rate, it is also possible to mass-produce KGRG larvae. Therefore, seed production techniques should be developed for the two hybrids and additional studies of growth performance, disease resistance, deformities during farming and the expression of economically important traits, including body color, are needed to establish the use of these hybrids as alternatives to the kelp grouper and red-spotted grouper in Korean aquaculture. 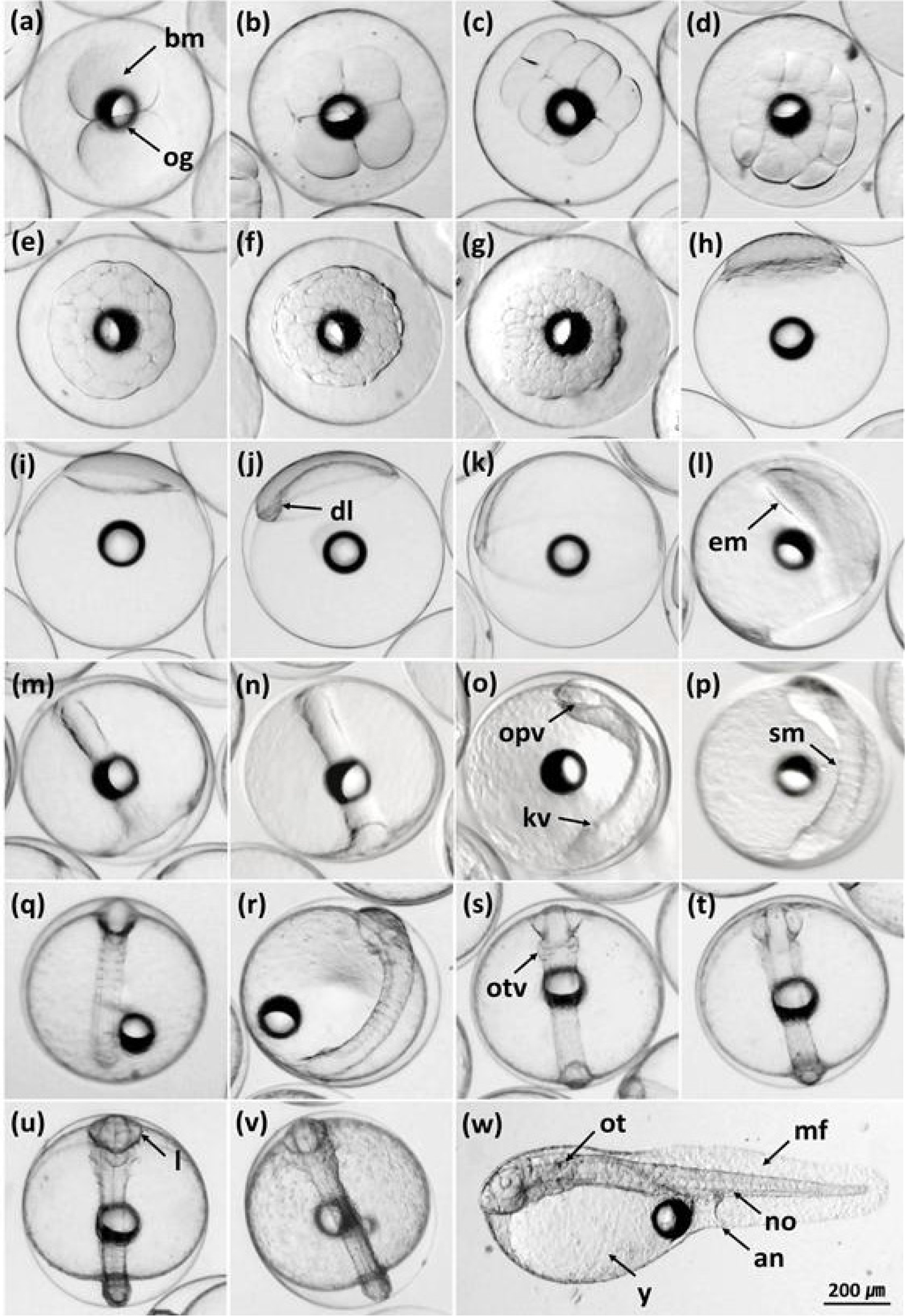 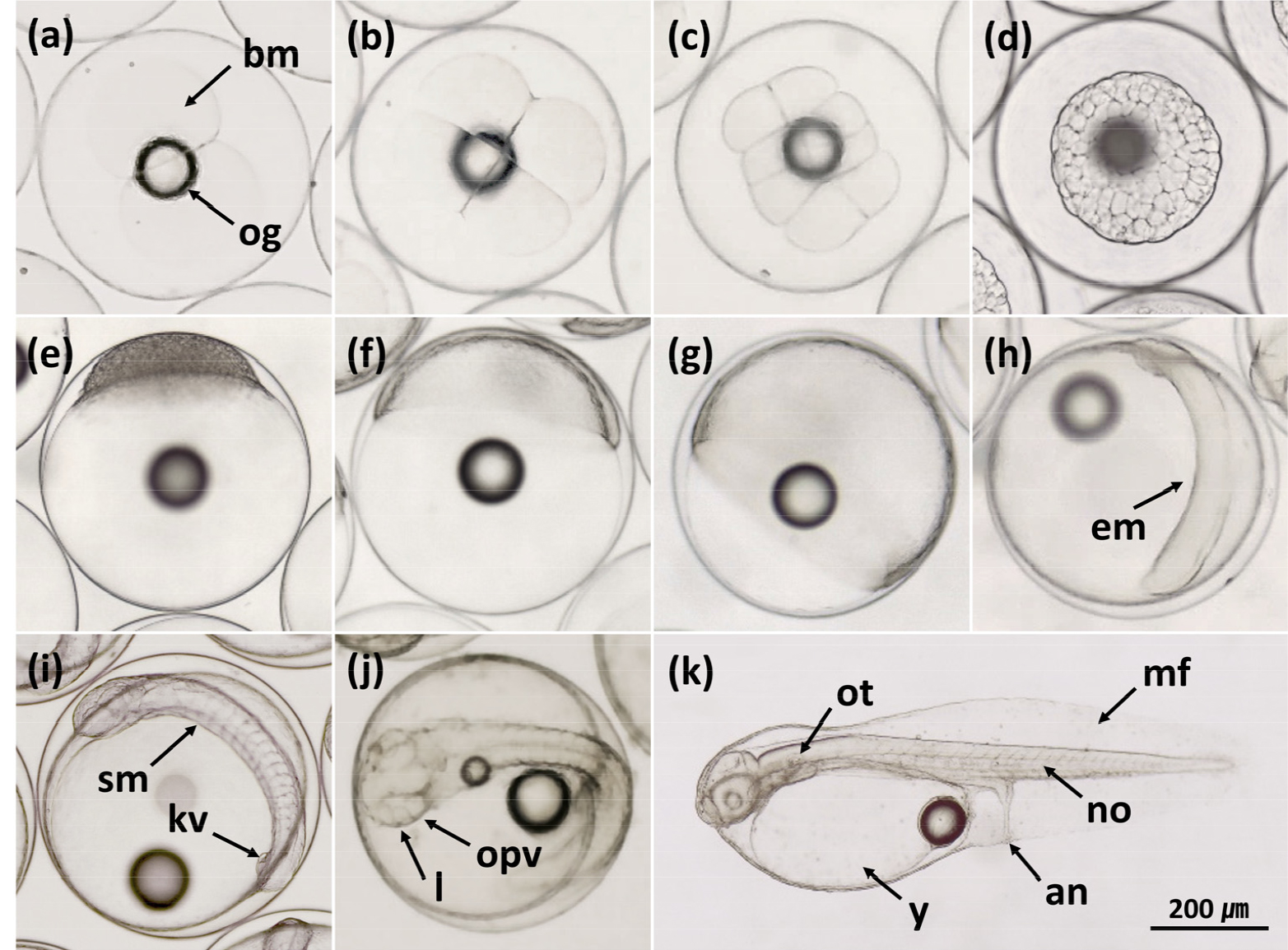 This work was supported by grants from the Korea Institute of Planning and Evaluation for Technology in Food, Agriculture, and Forestry (IPET) through the Golden Seed Project (213008-05-4-SB420), funded by the Ministry of Agriculture, Food and Rural Affairs (MAFRA); Ministry of Oceans and Fisheries (MOF); Rural Development Administration (RDA); Korea Forest Services (KFS); and the Korea Institute of Ocean Science and Technology (KIOST) through the Institute’s project (PE99822).