The present study measured the growth performance of juvenile hybrid of red-spotted grouper ♀ × giant grouper ♂ (RGGG) across four water temperatures (19, 23, 27, and 31°C) and compared it to those of maternal purebreds (red-spotted grouper ♀ × ♂, RG) for eight weeks. The specific growth rate (SGR) and weight gain (WG) of RGGG increased as temperature increased, with greater SGR and WG at higher temperatures (27 and 31°C) than RG. The condition factor of RGGG was higher than that of RG and there were no differences between temperature groups within breeding lines. Food consumption increased at higher temperatures for both RGGG and RG, and was the highest in the 31°C group. Similar to the SGR and WG, the food conversion rate (FCR) in RGGG decreased with increasing water temperature, with the significantly lowest value at 31°C; in RG, however, FCR progressively decreased in the 27°C group, then increased in the 31°C group. Furthermore, the FCR of the 31°C group of RGGG, which had the lowest value among the RGGG groups, was lower than that of the 27°C group of RG, which had the lowest RG value. In the analysis of nonlinear regression curves within the range of experimental temperature, the optimum temperature for SGR and FCR in RGGG was 31°C, unlike in RG. In conclusion, the growth performance of juvenile RGGG seems to have largely improved from the influence of paternal traits, hybrid with giant grouper, and it is presumed to be more profitable for commercial production in tropics/subtropics.

Water temperature is a critical environmental factor that most influences survival and growth of fish, and is one of first factors to be investigated in order to determine whether a novel aquaculture fish species is industrially useful (Jobling 1997). Obtaining information on optimum temperature is important not only for the rapid growth of a novel breed line but also the exploration of whether a new breed line would be suitable to culture in specific rearing water temperature. The red-spotted grouper prefers water that is 16.0–25.5°C (mean 20.6°C), whereas the giant grouper lives in subtropics (29°N–39°S, 24°E–122°W) and prefers water temperature between 24.3 and 29.1°C (mean 28.1°C) (Kaschner et al. 2016).

This study was undertaken to evaluate the efficacy of novel red-spotted grouper ♀ × giant grouper ♂ hybrid in the aquaculture industry. The effect of hybridization on the optimum temperature to maximize growth performance was investigated by comparing it with the maternal purebred at four different water temperatures.

Sixteen small net cages (1.5 × 0.9 × 0.9 m) were installed on eight rectangular FRP tanks (5 × 1 × 1.2 m) designed for stable juvenile (two net cages/tank). One unit was used for each experimental temperature: 19, 23, 27, and 31°C. Each unit consisted of two tanks (four net cages) to perform a duplicate experiment and one sand filter (MFS-600, Sam Ji Tech, Anyang, Korea) connected with PVC pipes (diameter 50 mm), and all water was replaced with new water at the experimental temperature every day or once every two days. In each tank, juvenile RGGG were stocked in one net cage and juvenile RG were stocked the other net cage in a same tank. The fish were randomly selected and stocked 30 fish/net cage (two experimental grouper/temperature/breed line). In the four groups, the size of the juvenile RGGG (SL 7.54±0.01–7.69±0.01 cm, BW 12.39±0.10–12.61±0.18 g) was significantly larger than that of the juvenile RG (SL 6.57±0.02–6.68±0.01 cm, BW 7.69±0.05–8.16±0.09 g) (p < 0.05), which could be attributed to a difference in growth from hatching to beginning of the experiment (five months). The experimental fish were stocked at 23°C, which was then increased by 4°C/day for the 27°C and 31°C group. For the 19°C group, low room temperature (10–15°C) was used to decrease the water temperature by 2°C/day. A digital temperature controller connected to a submersible titanium heater (2 kW, Sam Ji Tech, Anyang, Korea) was installed at the bottom of each tank to regulate and maintain the water temperature during the experimental period. The experiment was performed for eight weeks from the day the experimental fish were stocked, including the adjustment period, during which pellets (1.5, 2.0, and 3.0 mm pellets) from Aller Nova were provided manually until satiation, as during the acclimation period. Satiation was defined by a marked drop in feeding activity. The pellets were provided first to one of the net cages in each tank; uneaten pellets that sank to the bottom of the tank were collected and counted after pellet provisioning by siphoning. Afterwards, pellets were provided to the remaining net cage in the tank, and siphoning was repeated. The pellets collected by siphoning were excluded from the overall weight of the provided pellets. Sea water at the experimental temperature was supplied to compensate for the loss of rearing water from backwashing, rinsing, siphoning, and evaporation. During the experimental period, dissolved oxygen was provided through a pure oxygen generator (Aqua 7 L, Oxus Korea Co., Ltd., Seoul, Korea) and air blower (ASP140, Toshipump, Gwangju, Korea) to maintain an oxygen concentration above 5 mg/L. Salinity was maintained at 25–30 psu, the same as natural seawater. 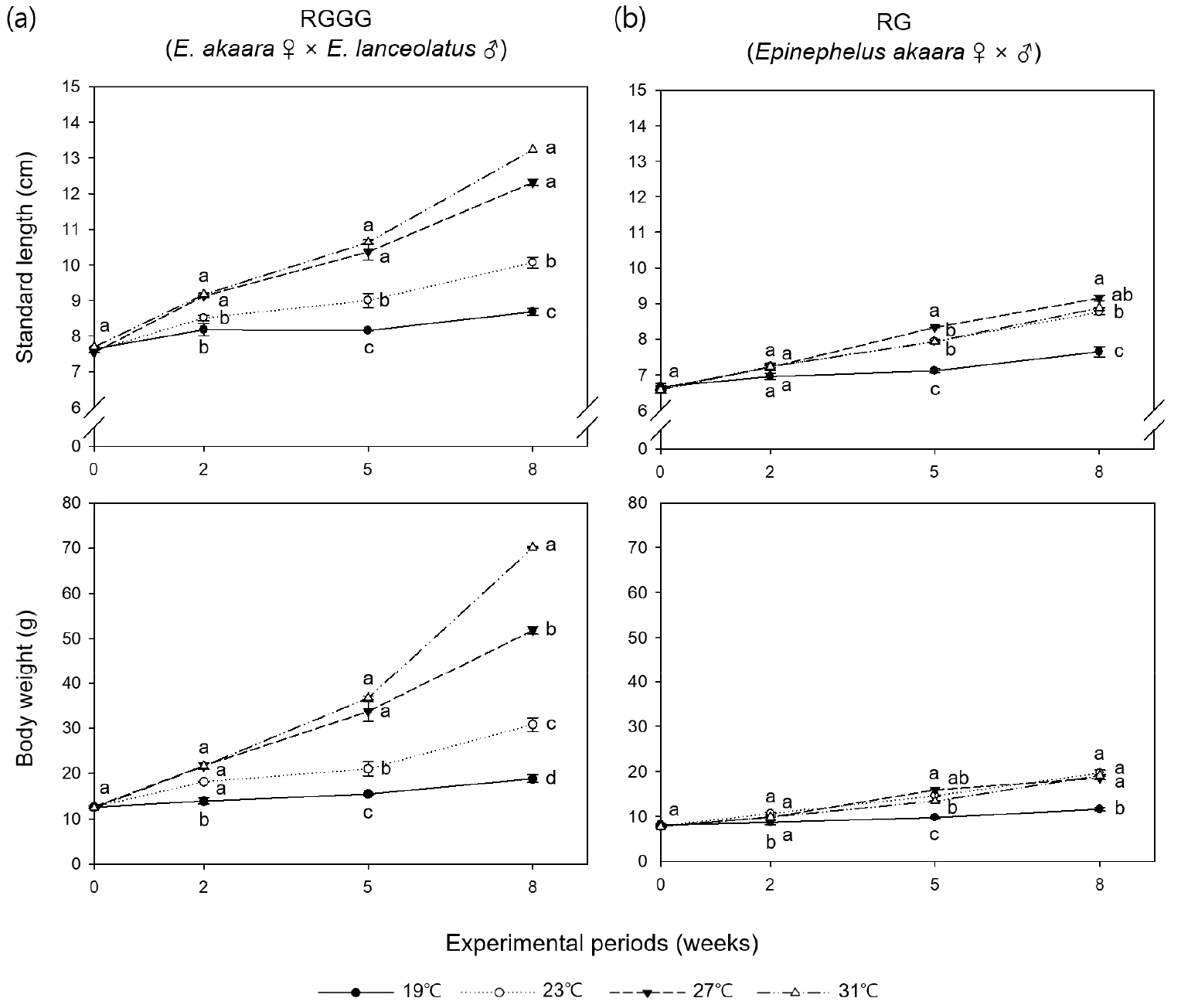 Standard length (cm) and body weight (g) of (a) juvenile RGGG (Epinephelus akaara ♀ × E. lanceolatus ♂) and (b) juvenile RG (E. akaara ♀ × ♂) reared for eight weeks at four different water temperatures. Different lowercase letters indicate the results of one-way ANOVA and Tukey’s honesty significant difference test when equality of variances was met; otherwise, the Games-Howell test was used. Values with the same letter are not significantly different at the 0.05 level. Grouping information for experimental periods of standard length and body weight of juvenile RGGG at eight weeks and initial body weight of juvenile RG is based on the Games-Howell test

Letters after values (mean±SE) indicate the results of one-way ANOVA and Tukey’s honesty significant difference test when equality of variances was met; otherwise, the Games-Howell test was used. Grouping information for condition factor is based on the Games-Howell test. Values with the same letter are not significantly different at the 0.05 level. 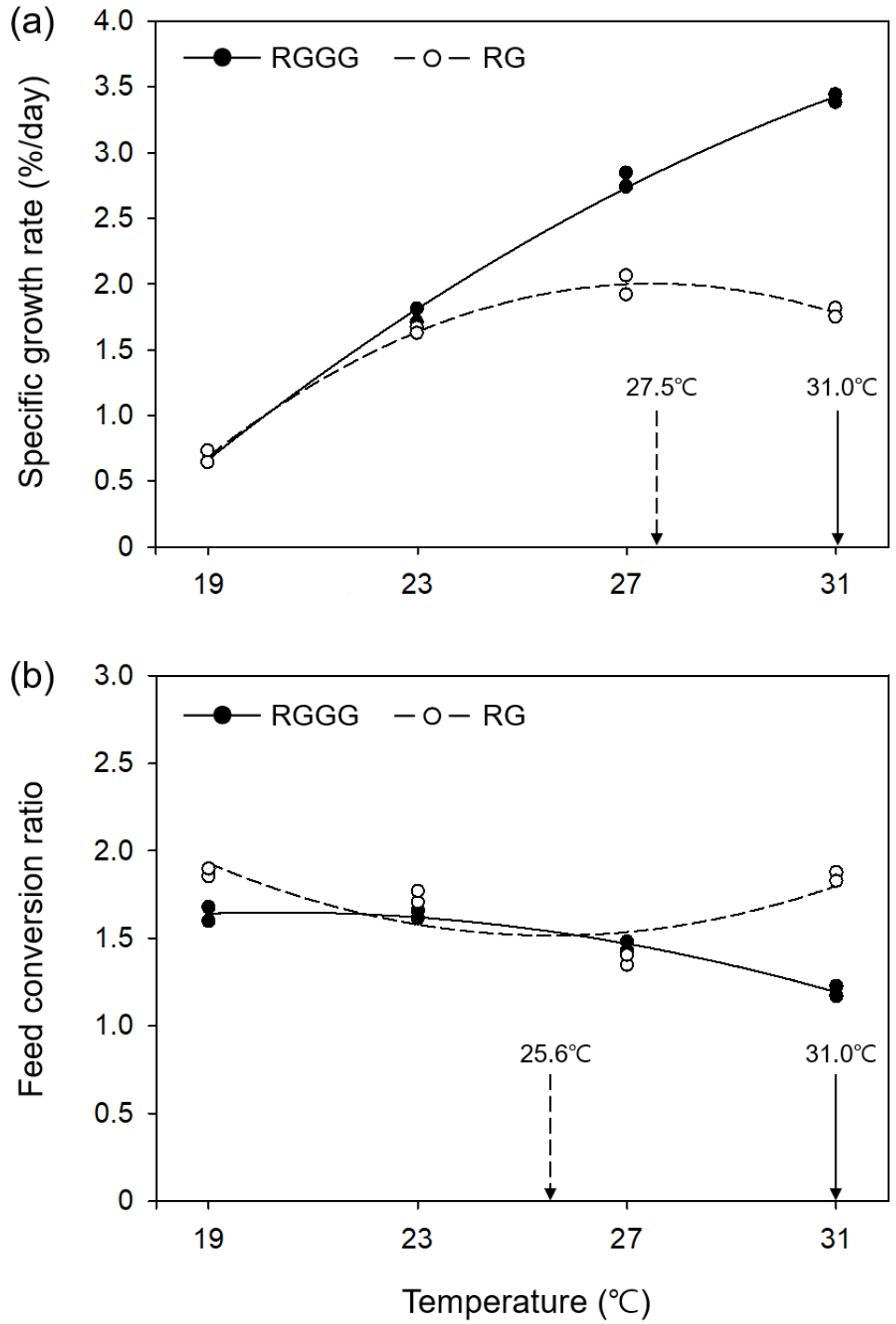 Both the breeding lines demonstrated an increase in FC with an increase in temperature, hence the highest FC was in the 31°C group (p < 0.05, Table 1), however, there was no significant difference between 23°C and 27°C group, and 27°C and 31°C group in RG.

There was no difference in optimum temperature for growth performance between juvenile RGGG and other groupers in tropics/subtropics, such as the orange-spotted grouper (E. coioides; 31.4°C, initial mean BW 14.75–281.41 g, Lin et al. 2008) and the Nassau grouper (E. stratus; 28–31°C, initial mean BW 3.20 g, Ellis et al. 1997). The growth of fish increases as water temperatures increase until it reaches the peak growth temperature, after which point growth is retarded as it nears the upper lethal temperature (Jobling 1997; Woiwode and Adelman 1991). The growth of the tiger grouper ♀ × giant grouper ♂ hybrid was lower at 34°C than 30°C (De et al. 2016) and that of the orange spotted grouper was lower at 35°C than 30°C (Lin et al. 2008). Thus, had there been a wider range of experimental temperatures in this study, the optimum temperature for juvenile RGGG growth would have been more accurately obtained from the regression curve between SGR and water temperature. However, since the natural temperature of the seawater in which net cages for rearing grouper is located are under 32°C even in the warm water region (Lin et al. 2008), it is unlikely that it can be applied to RGGG farming even if its optimum temperature for growth is higher than 31°C.

Condition factor is a non-lethal morphometric index that can be used to evaluate current body condition and the future growth of fish (Robinson et al. 2008). This index works under the assumption that a heavier individual at a given length has a more favorable body condition, which is supported by research on the relationship between the morphological index and physiological condition in many types of fish, such as the Atlantic salmon (Sutton et al. 2000). In this study, there was no difference in condition factor between groups in the same breeding line. The condition factor of juvenile RGGG was significantly higher than that of juvenile RG in 23°C and 31°C groups (p < 0.05), where there was no significant difference within each breeding line. This can be understood as a difference in intrinsic body shape resulting from the introduction of giant grouper traits rather than a difference in body condition between the two breeding lines. Especially, the condition factor of the juvenile RGGG in the 19°C group showed growth and survival without significant differences from the other groups. The survival rate of the juvenile tiger grouper ♀ × giant grouper ♂ hybrid (initial mean BW 121.62 g) was under 60% after 30 days of rearing at 19°C (Zhang et al. 2018). Thus, the difference in survival rates at low water temperatures between the two studies can be attributed to maternal traits and indicate the ability of juvenile RGGG to be reared at low temperatures, which is favorable to the aquaculture industry in temperate regions.

Protein digestibility enhances growth and increases with temperature (Mazumder et al. 2018; Muyan et al. 2006). The juvenile RGGG in this study showed increased FC and utilization at higher temperatures, which influenced the difference in growth depending on water temperature. When the water temperature is higher than the optimum temperature for growth, however, dietary energy is expended as basal metabolic energy, which retards growth by diminishing the feed used for growth (De et al. 2016; Jobling 1997). This corresponds to the results of this study, in which the FCR of juvenile RG decreased with increasing temperature, reaching its lowest value in the 27°C group, which was the optimum temperature for SGR, then increasing in the 31°C group despite having the same FC as the 27°C group. This also corresponds with results obtained in the tiger grouper ♀ × giant grouper ♂ hybrid (De et al. 2016; Zhang et al. 2018) and Nassau grouper (Ellis et al. 1997).

In conclusion, the growth performance of juvenile RGGG differed from that of juvenile RG in this study, in which growth and feed utilization increased dramatically as the water temperature increased from 19 to 31°C. The optimum temperature of juvenile RGGG to support their rapid growth performance was demonstrated to be similar to that of the paternal fish species (giant grouper), not the maternal fish species (red-spotted grouper). Additionally, juvenile RGGG had WG that was 2.7 times (31°C) and 1.8 times (27°C) greater than juvenile RG in the 27°C group during the eight-week experimental period, indicating a potential for shortened production time and enhanced quantity, which is expected to improve productivity in the aquaculture industry. With regards to the growth performance of juvenile RGGG, this novel hybrid grouper is not only appropriate for rearing in the tropics/subtropics, but also the temperate regions, where the hot effluent water from power plants (approximately 7–9°C warmer than natural sea water) and ground water (maintained at 28°C throughout the year) can be used as sources of energy. To improve the productivity and marketability of this hybrid, we plan to conduct research on the development of rearing techniques suitable for rapid growth on an industrial scale, disease resistance such as Vibrio spp. and expression of red body color resembling maternal fish species.

Funding: This work was supported by grants from the Korea Institute of Planning and Evaluation for Technology in Food, Agriculture, and Forestry (IPET) through the Golden Seed Project (213008-05-5-SB420), funded by the Ministry of Agriculture, Food and Rural Affairs (MAFRA); Ministry of Oceans and Fisheries (MOF); Rural Development Administration (RDA); Korea Forest Services (KFS); and the Korea Institute of Ocean Science and Technology (KIOST) through the Institute’s project (PEA0022).