Oncaea prendeli Shmeleva, 1966 is redescribed here based on a specimen collected using a fine-mesh net in the epipelagic layer in the south sea of Jeju Island, Korea. The Korean specimen is generally similar to Mediterranean specimens in terms of morphological characteristics, but it shows a few minor differences in a slightly larger length-to-width ratio for the distal endopod segment of the antenna, a relatively shorter caudal seta IV, and additional ornamentation on the maxillule and maxilla. This species is distinguishable from the most similar congeneric species, O. tregoubovi Shmeleva, 1968, and three species of the genus Spinoncaea Böttger-Schnack, 2003 by the distal and lateral armature of the antenna, ornamentation on the female maxilliped, spine number on the endopod of leg 2, and proportional length of setae on the caudal ramus. Moreover, spine lengths on the exopods of legs 2–4 are proposed as new morphological characters for the identification of congeners. This is the first record of O. prendeli in Korean waters.

Oncaeid copepods are relatively small marine cyclopoids that are distributed worldwide in high abundances (Huys and Boxshall 1991; Nishibe and Ikeda 2004). To date, the family Oncaeidae Giesbrecht, 1893 [“1892”] consists of 108 valid species in seven genera, with members distributed across the world’s oceans (Walter and Boxshall 2020). They are common prey of juvenile fish (Itoh et al. 2014) and play an important role in material cycling in marine ecosystems (Koski et al. 2017).

During an investigation of the zooplankton community in Korea waters, a previously unrecorded species, O. prendeli Shmeleva, 1966 was found in south sea of Jeju Island. Oncaea prendeli was originally described from the Adriatic Sea in the Mediterranean by Shmeleva (1966), but the original description lacked details such as the number of setae on the distal endopod segment of P1 and P4 as well as the caudal ramus. As the holotype of O. prendeli designated by Shmeleva does not exist anymore and the species needed to be reviewed, Huys and Böttger- Schnack (2007) redescribed the species and discussed dis-crepancies in detail based on the newly designated neotype.

The present study describes O. prendeli collected in south sea of Jeju Island and compares to the species from the Adriatic Sea in the Mediterranean described by Huys and Böttger-Schnack (2007). In addition, we compared spine lengths on the exopods and endopods of swimming legs 2–4 with those of closely related species, O. tregoubovi Shmeleva, 1968, and three species of the genus Spinoncaea Böttger-Schnack, 2003 newly established to accommodate with the species of Oncaeaivlevi-group.

The material examined in the present study was sampled using a fine-mesh conical zooplankton net (60 cm mouth diameter, 60 µm mesh) deployed from a depth of 110 m to the surface at station KS4 (32°36'46.66"N, 126°42'51. 89"E) in south sea of Jeju Island on October 7, 2008 (Fig. 1). Sample was immediately fixed with 99.9% ethyl alcohol on board. For the morphological examination, the specimen was dissected with tungsten needles and mounted in fluoromount-G on an H-S slide, which then was sealed with transparent nail varnish. All figures were prepared using a drawing tube attached to a differential interference contrast microscope (Leica DM2500, Germany). Scale bars in the figures are given in micrometers (μm). 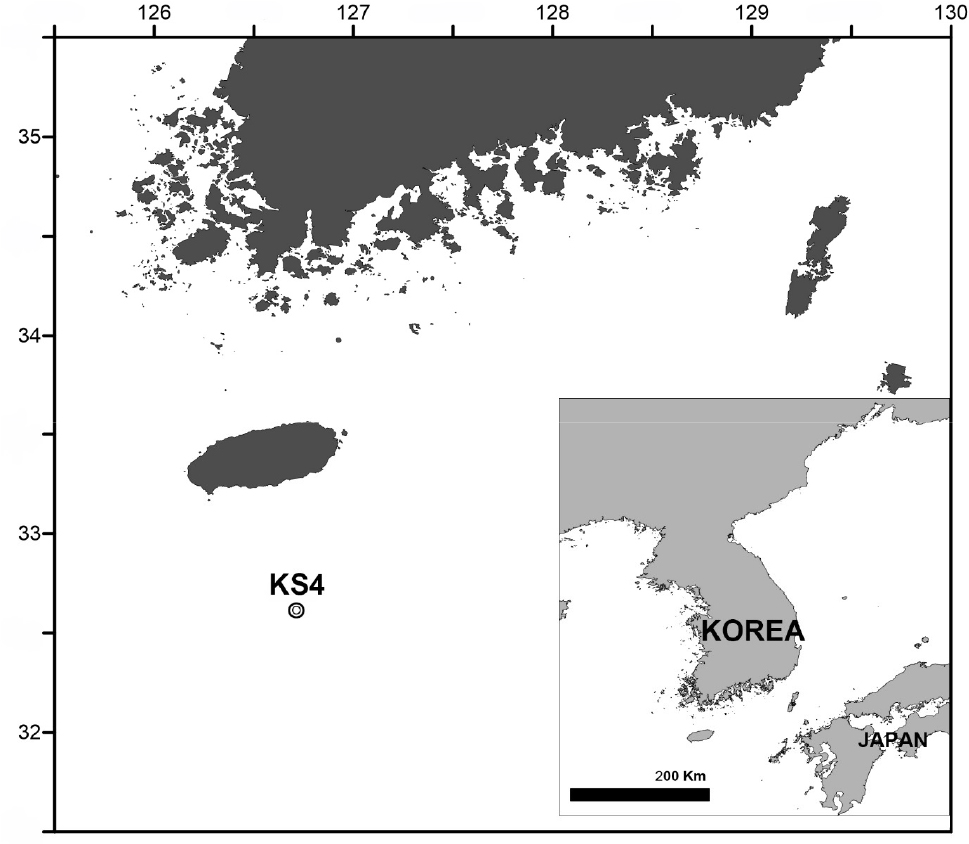 Location of the sampling station in Korean waters 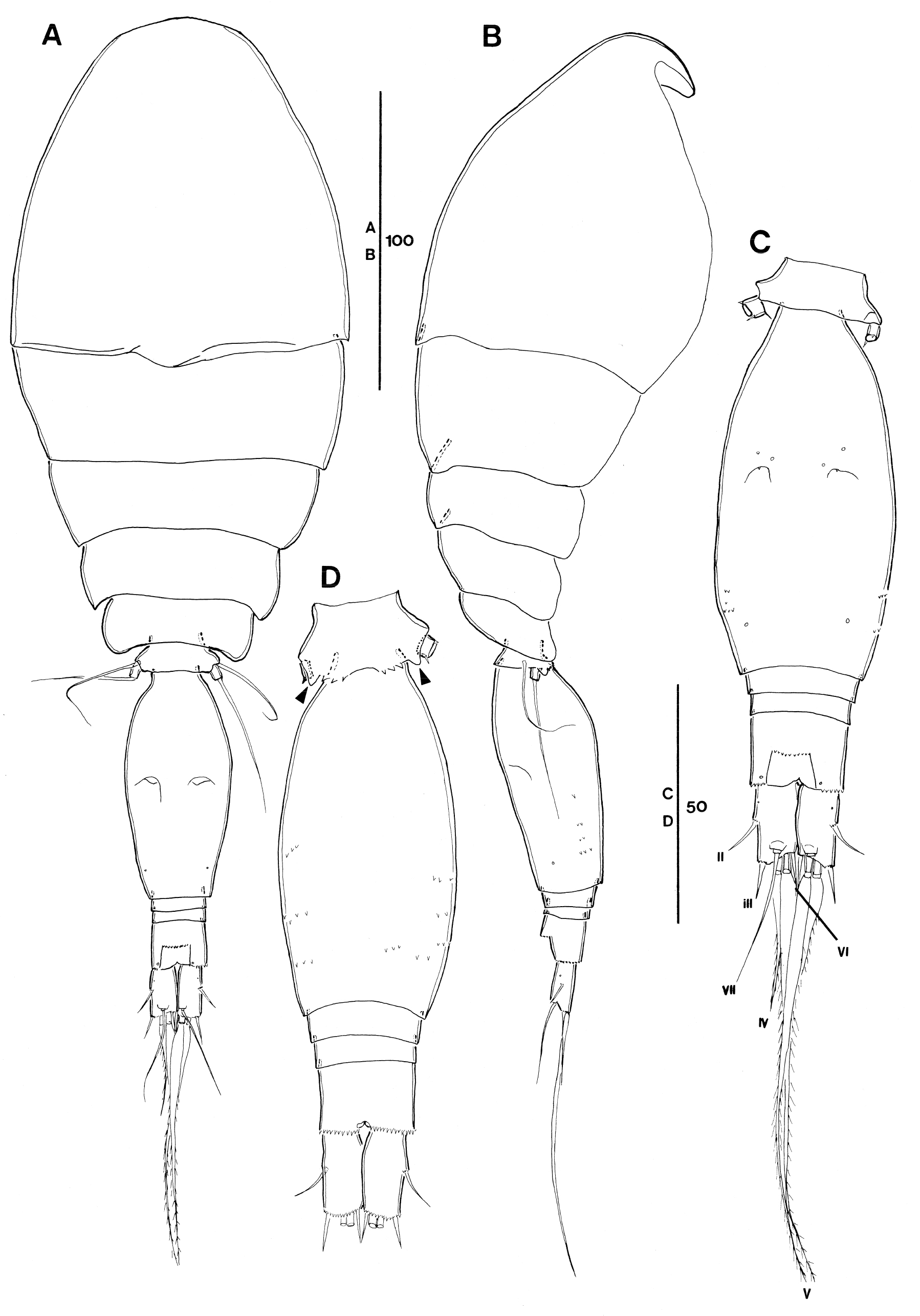 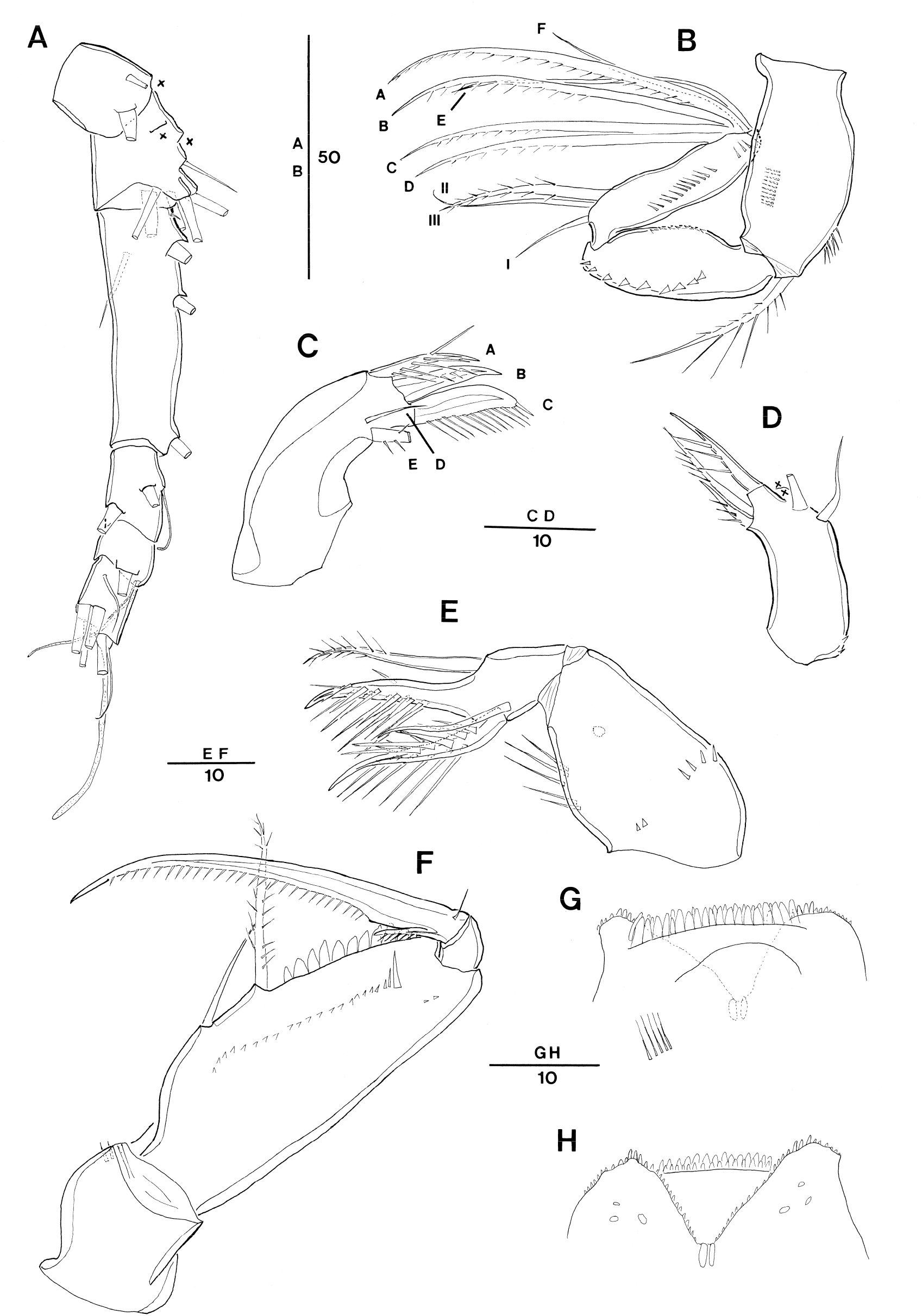 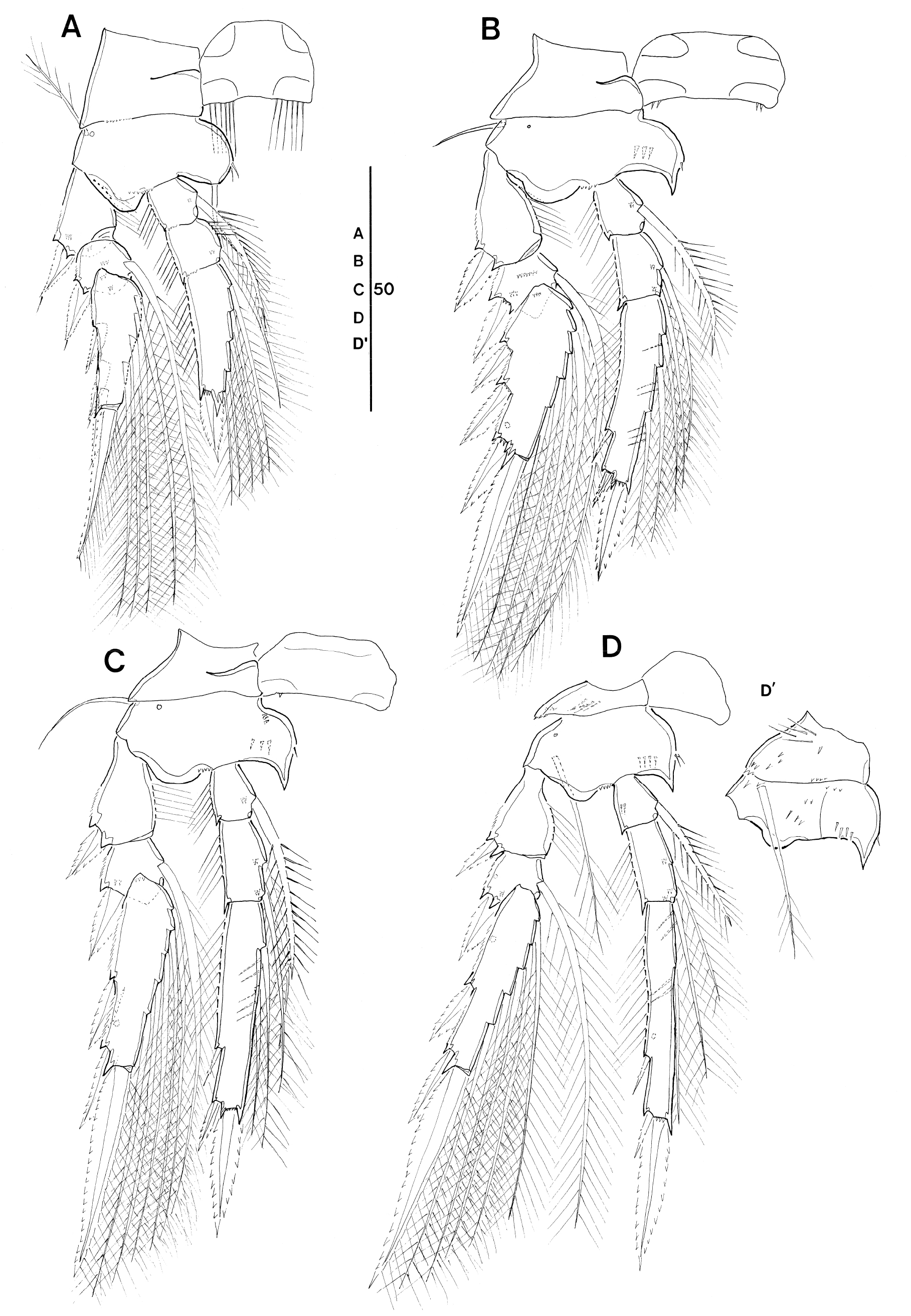 Labrum (Fig. 3G and H) indistinctly bilobed (damaged, some anterior part not figured). Each lobe with 3 marginal teeth on distal margin and row of short spinules or denticles along outer ventral and inner margin. Median concavity covered anteriorly by overlapping rows of hayaline spatulate spinules, anterior surface with paired row of long setules (damaged, only one side figured in fig. 3G). Posterior wall of medial concavity with 2 chitinized spinous teeth, flanked by row of tiny denticles or spinules. Posterior surface with 3 pairs of secretory pores located distally on each lobe.

Mandible (Fig. 3C) without surface ornamentation on gnathobase; with 5 clearly separated elements: 3 setae and 2 blades. Ventral seta (A) as long as ventral blade (B), with long setules along dorsal side; ventral blade (B) strong and spiniform, with row of setules on posterior side; dorsal blade (C) strong and broad, spinulose along entire dorsal margin; seta D short and naked; seta E (damaged) setiform and bipinnate.

Maxillule (Fig. 3D) (damaged, some elements not figured). indistinctly bilobed, with few spinules around proximal outer margin. Inner lobe (praecoxal arthrite) subcylindrical, with 3 elements: outermost element spiniform, swollen at base, ornamented with row of spinules; others setiform and sparsely unipinnate. Outer lobe with 4 elements (of which 2 elements missed as indicate crosses in the Fig. 3D).

Maxilliped (Fig. 3F) 4-segmented, comprising syncoxa, basis and 2-segmented endopod. Syncoxa unarmed, surface ornamented with few spinules subdistally. Basis oval-elongate, and with 2 spiniform setae, the distal one being about 1.4 times the length of proximal one, with 2 rows of short spinules along entire length and the proximal one naked; fringe of short spatulate spinules along palmar margin between distal seta and articulation with endopod; anterior surface with row of short spinules and row of spinules of varying length near articulation with endopod as illustrated in Fig. 3F. Proximal endopodal segment small and unarmed. Distal endopodal segment drawn out into long curved claw, with spinnules along entire concave margin; accessory armature consisting of short, slender seta on outer proximal margin and unipectinate spine basally fused to inner proximal corner of claw.

*Values from left and right on swimming legs

P5 (Fig. 2A and B) comprising long outer basal seta, which is naked, reaching as far as genital apertures [this seta gets lost during handling] and a small free segment representing the exopod. Exopod slightly longer than wide (Fig. 2A), ornamented with small spinule ventrally and small spinous process dorso-laterally at posterior margin (Fig. 2C) and armed with single long, naked seta, reaching as far as 2/3 from anterior margin of genital double-somite.

P6 (Fig. 2C) represented by operculum closing off each genital aperture; armed with a short spinule.

The female O. prendeli has the following morphological characteristics: (1) elongated and slender distal endopod segment on antenna; (2) armature of the antenna with six distal setae without seta G, and three lateral setae without seta IV; (3) presence of two medial teeth on the posterior surface of the concavity on labrum; (4) ornamentation on the female maxilliped with spatulate spinules; (5) presence of midventral spinous processes on the P5-bearing somite; (6) ornamentation along the ventral margin of the P1 intercoxal sclerite, with a paired row of long, fine setules; (7) presence of a spinular row along the inner margin of P1 enp-2; (8) reduction of the P5 exopod with a single seta; and (9) lanceolate form and length of caudal seta IV.

Subtle morphological differences and/or small ornamentation details are significance for identification of oncaeid species (e.g. Böttger-Schnack 2003; Wi et al. 2010). To easily discriminate among related and sister species of the oncaeid group, which are very small and thus, have micro-characters that are difficult to analyze, proportional spine lengths on the exopods and endopods on P2–P4 were measured as previously described (Heron and Bradford-Grieve 1995; Böttger-Schnack 2005; Cho et al. 2017, 2019). The outer spine on proximal exopod segment relative to the outer spine on middle exopod segment of O. prendeli tends to be smaller than those in both O. tregoubovi and the Spinoncaea species, whereas differences in endopodal spine lengths among these five species are not informative (Table 2). Although such information is currently lacking, it is necessary to consider not only the relative lengths of the caudal setae but also the proportional outer spine lengths of the exopods in P2–P4 to clearly distinguish O. prendeli from closely related species.

The current distribution range of O. prendeli extends from in the Mediterranean Sea to the equatorial Indian Ocean (Huys and Böttger-Schnack 2007) and Tosa Bay in southern Japan. However, the latter Japanese record was based on an ecological study, not a taxonomic one (Nishibe et al. 2009). Herein, we report the occurrence O. prendeli in Korean waters. Thus, this species likely has a wide distribution range.

The species diversity of oncaeid copepods collected using a fine-mesh net (< 100 µm) is higher than those using other collection methods. Nishibe et al. (2009) added more than 20 species to those previously known when they used a 63 µm mesh net for their investigations. Cho (2011) also identified 19 previously unreported oncaeid species in the northeast equatorial Pacific after sampling with a 60 μm mesh net. Therefore, to discover new or unrecorded species of small oncaeids in Korean waters, it is necessary to use a fine-mesh net (mesh size ~60 µm).

This research was supported by the Center for Women In Science, Engineering and Technology (WISET) and WISET Regional Agency of PKNU Grant funded by the Ministry of Science and ICT (MSIT) under the Program for Returners into R&D (Returners into R&D program of Dongnam regional agency No. 2020-008) to K Cho and by a grant (2018R1A6A3A01012703) of the National Research Foundation of Korea (NRF) to JG Kim. This work was conducted by the Marine Biotechnology Program of the Korea Institute of Marine Science and Technology Promotion (KIMST) funded by the Ministry of Oceans and Fisheries (MOF) (No. 20170431) and by a KIOST (PE99813).