Located approximately 80 km off the south coast of Korea, the shallow subtidal area of Jeju Island is enriched with fauna and flora (Cho et al. 2014; Noseworthy et al. 2016; Kwun et al. 2017). Such a high species diversity in coastal Jeju Island can be attributed to the warm Tsushima current, derived from the Kuroshio current, as numerous fauna have a zoo-geographical affiliation from the subtropical to tropical (Noseworthy et al. 2007; Sugihara et al. 2014; Lutaenko et al. 2019, 2021). According to Khim et al. (2021), 511 species of marine invertebrate animals have been recorded from Jeju Island, and mollusks constitute approximately 60%. Sugihara et al. (2014) identified seven species of zooxanthellate scleractinian corals on Jeju Island, these corals exclusively occurring there.

In May 2013, we surveyed four shallow subtidal hard bottoms on northern Jeju Island to gain insight into the newly discovered coral carpets and the associated molluscan fauna. This study reports preliminary results obtained from the survey.

For the survey, we selected three shallow subtidal rocky areas located on northern Jeju Island, including Gwidok-ri (GDR), Biyangdo Island (BYD), and Keumneung-ri (KNR) at a depth of 5 to 10 meters where A. japonica formed coral carpets (Vieira et al. 2016; Noseworthy et al. 2016) (Fig. 1). As a control, the Donggwi-ri (DGR) subtidal area was selected, where there is no A. japonica coral population. In May 2013, we installed a 1×1 m2 quadrat on the four sampling sites, using SCUBA, and all the coral colonies and associated epibenthic fauna in the quadrats were removed.

The underwater survey revealed that A. japonica occurred at a high density forming a layer on the bottom called a coral carpet at GDR, BYD, and KNR (Fig. 2). The densities of A. japonica colonies were determined to be 155 (GDI), 133 (BYD), and 94 (KNR) colonies/m2 respectively. 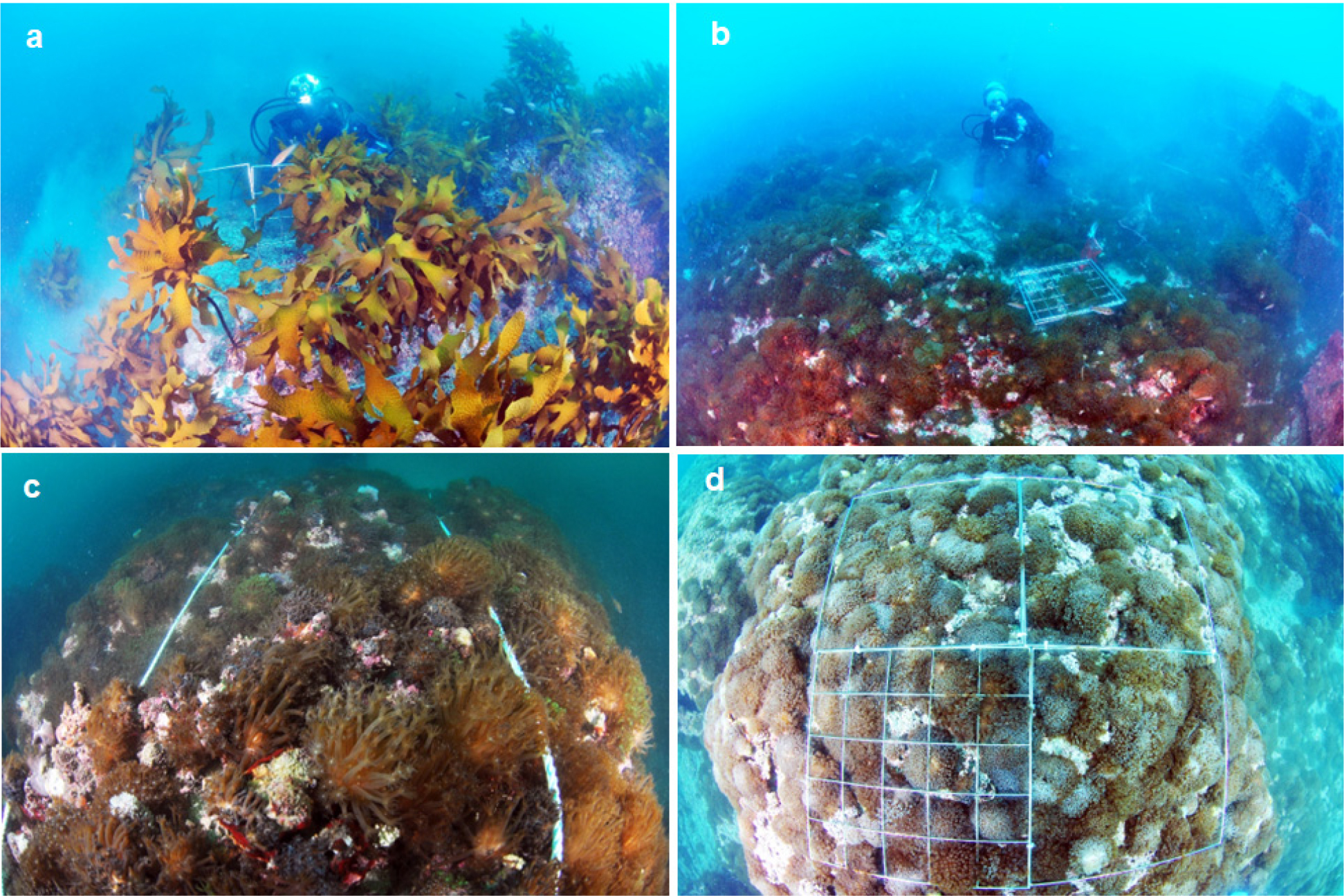 Numerous molluscan fauna were identified from the quadrats from the four sampling sites. A total of 34 species were identified, 20 bivalve species in 11 families and 14 gastropod species in 9 families, indicating that bivalves outnumbered gastropods (Table 1). The bivalve and gastropod species identified from the coral carpets were distributed from intertidal to shallow subtidal areas and occur in tropical to sub-tropical coastal zones.

Molluscan species in A. japonica coral carpet surveyed from 4 sampling sites in Jeju Island in May 2013 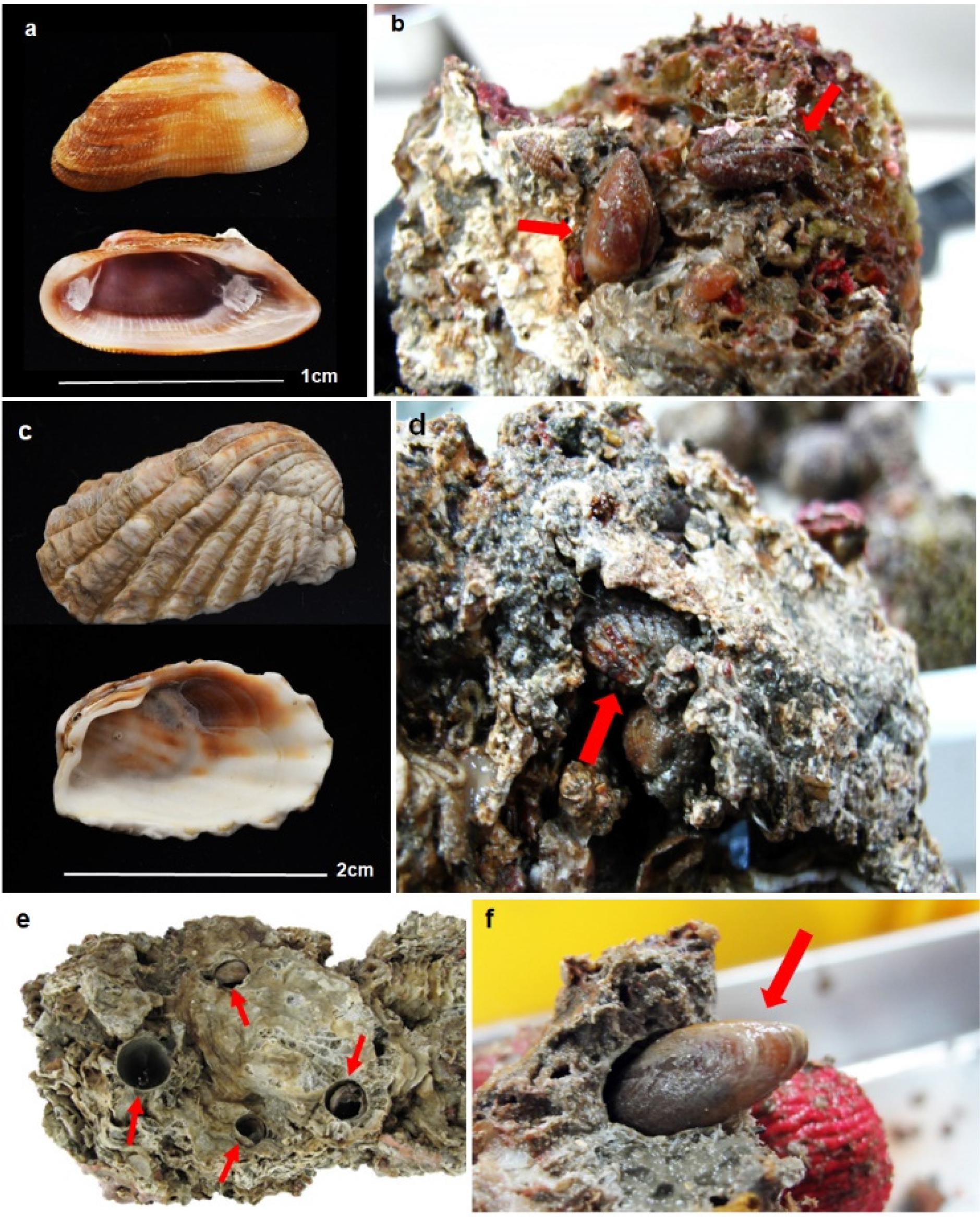 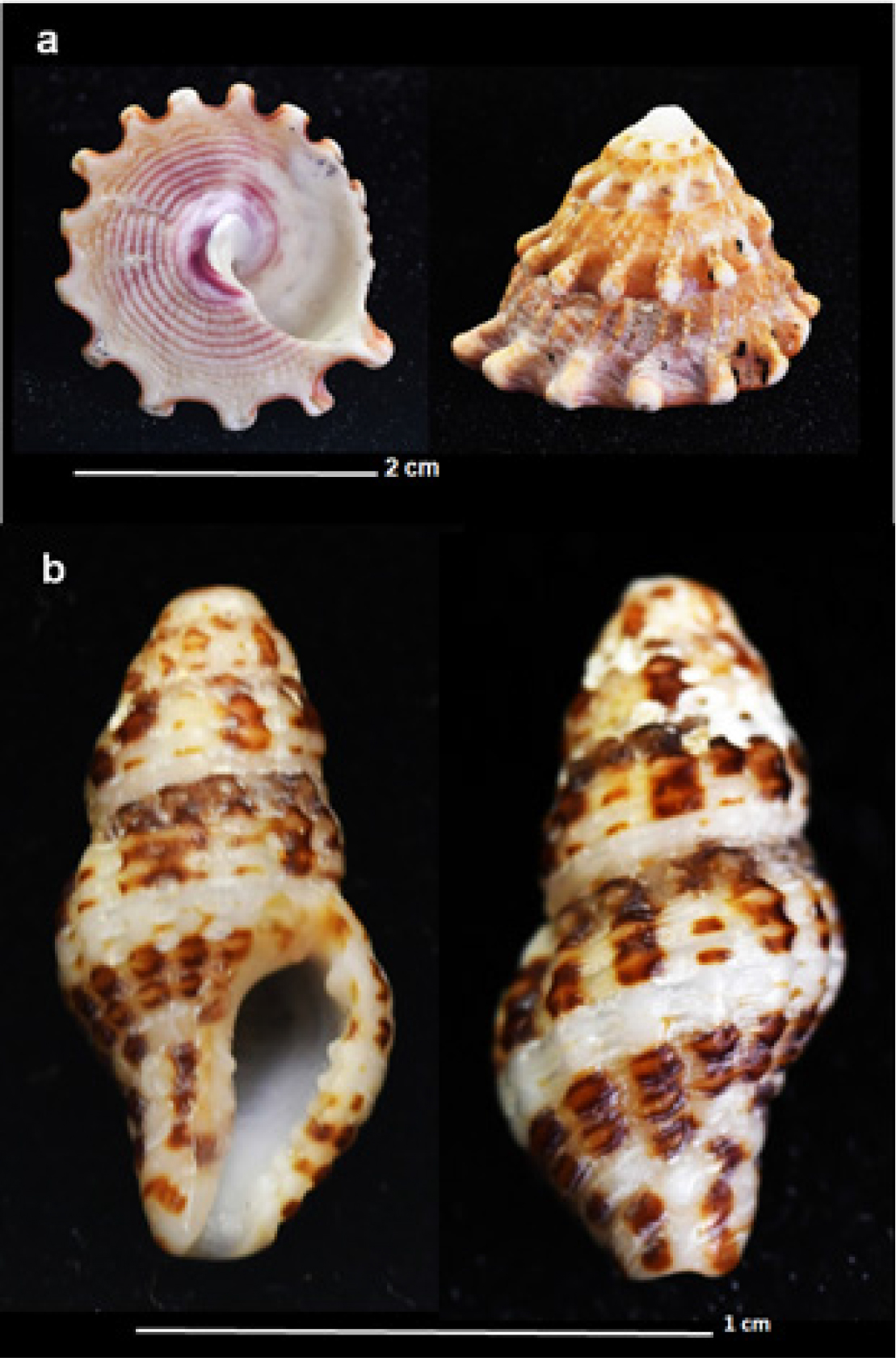 In a coastal hard-bottom benthic community, small mollusk species or juvenile or sub-adult bivalves and gastropods seek refuge from predators (Stella et al. 2011). Accordingly, the crevices at the base of the coral colonies and the stinging tentacles of the living polyps of A. japonica would provide refuge and protection from predators. In this study, almost all the bivalves and gastropods associated with A. japonica colonies are small species or juvenile and subadult specimens of larger species. Thus, it is likely that the A. japonica coral carpets in Jeju Island are used as a nursery for the juveniles of large gastropods and bivalves, although more investigations are needed to substantiate this hypothesis.

According to Zuschin and Piller (1997), bivalve species associated with the coral carpet in Safaga Bay in the Red Sea are suspension feeders. Reed and Mikkelson (1987) also reported that most bivalve species associated with the ivory scleractinian coral Oculina vericosa in coral reefs on the eastern coast of Florida are suspension feeders. The relationship of invertebrates to corals may be facultative or obligate, depending on whether they need their coral hosts for survival. As L. curta and B. steamsi are often associated with other organisms in the intertidal environment, they are considered to have a facultative association with A. japonica. It is believed that the high density of A. japonica colonies may trap organic particles, including some planktonic or benthic microalgae and detritus, as they are filtered and utilized by the small suspension- feeding bivalves as observed in this study (Yonge 1955; Carter 1978). The high density of mollusks associated with A. japonica might also point toward the bioerosion of the skeleton of A. japonica colonies. According to Vieira et al. (2016), A. japonica has a short lifespan varying from 12 to 15 years, suggesting a high turnover capacity of these corals. In the coral carpet habitats in the shallow subtidal on Jeju Island, the dead coral colonies act as substrata for the next generation, facilitated by erosion through associated mollusks and other boring organisms such as coral-boring barnacles (Noseworthy et al. 2016; Kim et al. 2021). Currently, limited studies have investigated ecological associations of benthic fauna with the coral carpets in Jeju Island, which require more surveys and a closer examination of other mollusk assemblages to reveal fresh insights.

This study was supported by a research grant from Jeju National University in 2022.